You don’t forget the face of the person who was your last hope. -Suzanne Collins

Growing up, my parents never wasted any food. Although, we always had just enough to eat, we certainly didn’t have enough to waste. But I learned the real reason behind their no-waste policy at age 9 during our first visit to India.

After much preparation, our suitcases are packed with gifts until they are ready to burst. Returning to our homeland from Canada, it’s unthinkable to arrive empty-handed.  We leave on a cold Saturday afternoon in December. Our seven week long trip would span over the Christmas holidays to ensure the least amount of disruption to our lives here. We arrive in Bombay, as it is called at this time or Mumbai, as the locals call it, in the dark of the night. Compared to Montréal International Airport (otherwise known as Mirabel), Santa Cruz airport is literally a few small buildings strung together. Exiting the airplane, onto the tarmac, the first things that hit you are the odour and the humidity. Eventually, you learn to accept the odour, but the humidity is unrelenting, even in the middle of the night. My parents had warned me about how different India is compared to Canada, but still, I find myself unprepared. Within minutes of exiting the plane, India no longer feels like home to me anymore. Six years abroad can do that when you are so young.

My parents, on the other hand, are jovial; I’ve never seen them this happy. But that does not comfort me the least bit; I’m feeling confused and scared. Out on the tarmac, there’s lots of shouting going on in a mix of the local Marathi and the official language of the country, Hindi. I don’t understand either of the two. The only languages that I know are: Gujarati, my mother tongue that I now speak awkwardly and with a foreign accent; English, the language that I am now most comfortable with; and French, the second language that I am taught at school.  But my parents speak and understand Hindi with ease and eventually, we make our way to one of the buildings and wait in front of the baggage carousel. It doesn’t take long for the airport workers to offer us help with our baggage. They recognize that we are foreigners (despite the fact that each one of us, my parents, my older sister and I, was born in India), and this, they equate to a substantial tip. What they fail to recognize is that in Canada, we hover just above the poverty line and live well below our means and that we had scraped together all of our savings to make this trip. The previous summer, my paternal grandfather had unexpectedly passed away, sending my parents into a sudden frenzy and fueling the urgency to visit before it would become too late to see other family members again as well.

Eventually, after what seems like forever to me, and during which, my father has strategically paid off a number of airport authorities, we get past customs. In this country of so many have-nots, money talks loud and clear and with such a low exchange rate even a poor man can play the game of a rich one.

A group of 15 or so family members are waiting to greet us with garlands. I recognize no one. Although, there is sadness since my grandfather is not among those who have come to greet us, overall, everyone is exuberant. Everyone, except me. Our hosts take turns hugging me and telling me who they are and although their names sound familiar, I feel guilty that my familiarity with them ends with their name. We make our way outside to the two Westfalia minibuses that were rented out just for this occasion The men start loading the baggage; the women, busy overseeing this. We are approached by beggars. Only, I don’t know that that is what they are. I mistaken them for airport workers who have come to help us so I smile at them.Their faces remain expressionless. Soon I realize that their clothing is torn and their feet are bare. Feeling uneasy, I pull on my father’s shirt sleeve to get his attention. He turns around to me and completely unfazed, he reaches into his pockets and hands them each some money. Clearly, he has done this before. The beggars praise him and as they walk away, my father’s brother scolds him. “Now that you are a Canadian, are you so wealthy that you can give your money away so freely?” he asks sarcastically. Their sister replies, “Let him be, he has always been the generous one that’s why God brought him to Canada.”

Finally the buses are filled to maximum capacity with baggage and people. There isn’t sufficient place for all of us in them, so some of my relatives flag down rickshaws to make their way to the train station to take the train back home. Home is 200 km away, on a farm in our ancestral village in Gujarat. But the inter-provincial road system is so crude that it will take some eight hours to cross this distance by road.  I feel lucky; I got a window seat. My sister did not. As our bus makes its way out of the airport perimeter, I see them. They appear as greyish-brownish clouds, camouflaged by their surroundings but visible if you look carefully. This time though, there is no possibility of misinterpretation.  I see them along the road. I see them at the stop we make for a bathroom break. They are homeless and hungry. If you think the line between life and death is always thin, then you have never seen this sort of destitution. Sure I had seen images of famine ravaged Africa on television but it’s amazing how much emotion a television in the comfort of your living room can water down. And until you see this sort of destitution up close, you never really know it.

My sister, the lucky one, is asleep, unaware of the tragedy that unfolds outside my window. The adults are busy talking, filling in the details of events from the past six years that until now were only summarized in brief sentences in letters sent.  I am not interested in their stories; especially those of my uncle. It seems to me that he does not seem to understand what it’s like to be poor, as I do. I cry silently in the dark while feigning sleep. Even at age 9, I know that their faces would never escape me. It’s not so much their overall appearance or their sadness that gets to you. It’s not the deformed aftermath of leprosy. It’s the look of hope that glistens in their eyes, telling you “If you feed me just this once, I will be okay”. That they have hope… in you, that’s what’s most haunting.

By the time dawn breaks and light emerges, we are far enough away from this slum city making our way to greener pastures (literally, to our farm). But those few hours have claimed a little piece of my childhood innocence.

To this day, I remain unchanged. I can not waste food. And that is why I make this banana bread. I will tell you honestly, this is the only reason I make it. Yes, it’s moist, delicious too, but certainly not my favourite. And never has any of my children ever said, “Hey Mom, can you make some banana bread?” But it’s made anyways, because there are over-ripened bananas that I don’t want to throw away. Because if I did, I would be telling the faces that haunt me that their lives matter less than mine. 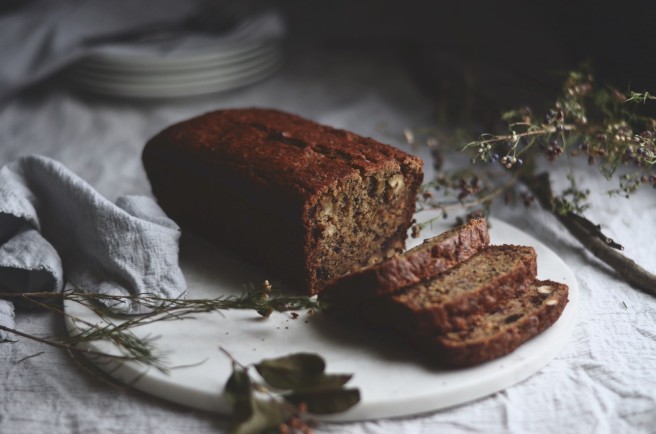 I suppose that a food blog is probably the last place one would want to read about hunger and poverty. But it disheartens me, especially because I get to make food my hobby while this basic necessity is denied to others, and not because we lack it in this world but because we have designed it as such. It disheartens me to think that in a country as developed as Canada, there is poverty.  It disheartens me to think that the human race has overcome so many obstacles but still, there are hungry children on our planet. And for this reason, I need to talk about it, here on a food blog. It doesn’t feel right, but it never will until this problem is eradicated. There are many ways each one of us can make a difference starting with reducing food wastage in our own homes. So if you find yourself with some over-ripened bananas, you can stick them in the freezer for a smoothie or make this cake but please don’t throw them away.

August 2020. I adapted the first recipe below to make a chocolate version after a friend piqued my curiousity. Unlike the original, the chocolate version is a clear favourite here and every week, bananas are set aside to ripen specifically for this cake. The recipe is below as well. Thanks Joel! 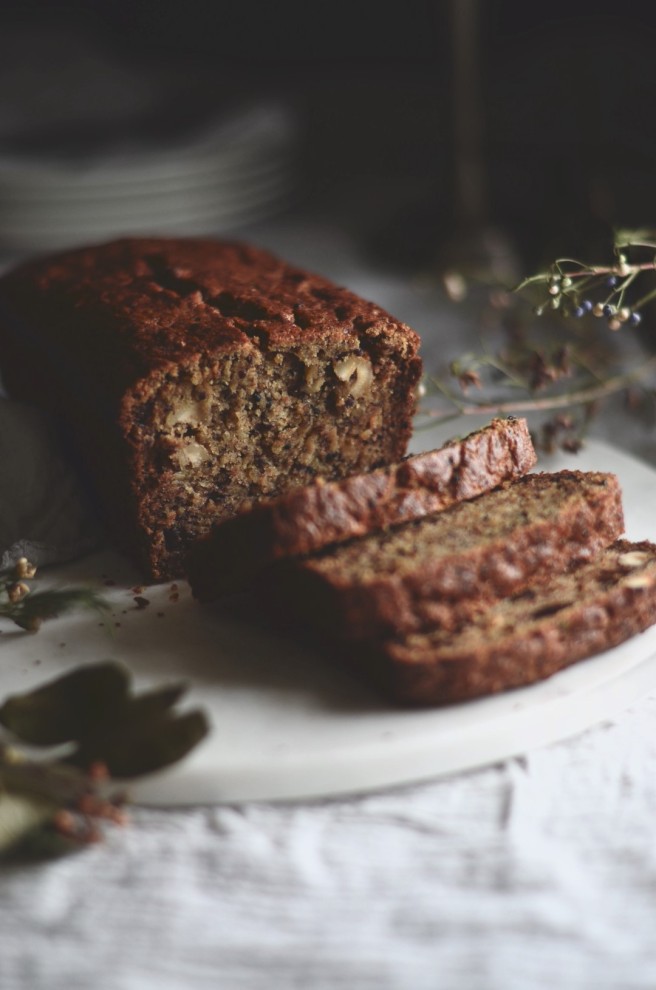 Banana Bread with Nuts and Dates (adapted from here)